“I came back from a job assignment in New Jersey and discovered my marriage was over. That Sunday I woke up on a deflated air mattress on a hard wood floor and it hit me that this was such a perfect metaphor for my life situation.”

Growing up in Mexico as a missionary kid, David Bruchie had a lot of worthy goals in life.

Among them was getting his pilot’s license and returning to ministry in Mexico.  To that end, he graduated from TBC in 2012 with a Bachelors in Pastoral Theology.

But when he woke up that Sunday morning in 2019, all he could see in life was the rubble ruined dreams. Problems had been brewing for a while, but this was the moment it all came crashing down around him.

Deeply hurt and angry, David dreaded questions that were sure to come if he walked into his home church.

Instead, he found his way to a church plant (The Foundation) nearby, admittedly to poke holes in the sermon.

“My critical, theology-nerd brain thought, ‘We’ll see what this guy has to say.’”

Ironically, this cynical decision turned out to be the first tentative step toward renewal.  The pastor and a mutual friend sought him out after the sermon and spent the next two hours listening to him, crying with him, and seeking God in prayer. 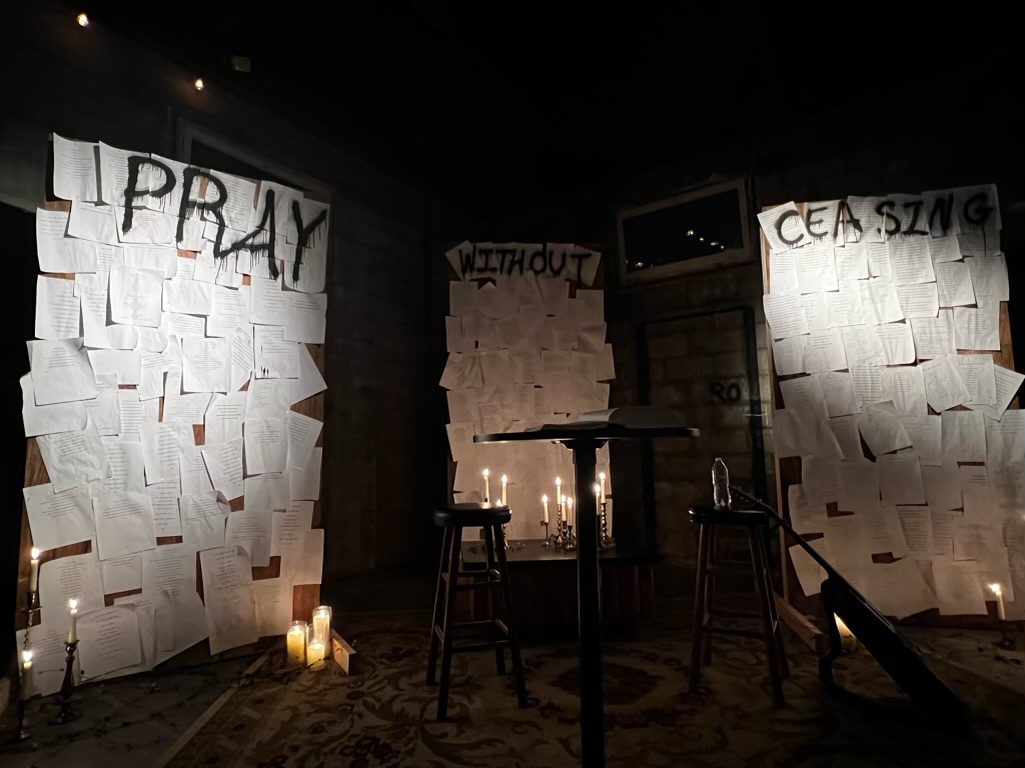 “I realized I really needed these people, but I didn’t know what to do about it.  This church was so different in every way from what I was used to, but there was stuff going on at my church that I wasn’t feeling good about either.”

At that point in David’s life everything was broken: marriage, family, friendships, church… everything. Depression closed in.   He says that in hindsight, God was allowing things to fall apart so He could put them back together.  Pastor Ashton from The Foundation church continued to check on him; gently but persistently inviting him to experience life, energy, and fun with other believers.

“When they first invited me to a Friday night basketball game it felt like a lifeline; something to do besides numb the pain or cry myself to sleep.”

“I started showing up at games and church.  I literally think it saved my life.  Community saved my life.  And it showed me an aspect of ministry that I didn’t notice before.

There were days when I didn’t want to get up.   I believed in God’s sovereignty, but when things go crazy, and your wife leaves… in situations like that you can really start to question things.  I had some really raw moments with God. I told Him, ‘You say you’re good and you’re in control. You gotta prove it because it doesn’t look that way right now.’”

He says that God has answered that question over and over.

He began to witness lives being radically changed.  He watched a drug addict come clean, a woman abandon her life as an escort and turn to Jesus, and three different marriages pulled back from the brink of disaster.  None of this was a result of special programing (they have none available), but simply the gospel – God’s Word –at work.

“I started to see what was happening within the community through this church that just loved people.  I’ve lived in the area for years.  There was nothing here, no life.  It was a bit of a ghost town; nobody cared about the condition of the streets or the people walking in the streets.

But this isn’t a dead-end town anymore. There are people coming from four different counties to a one-light town to come to church.  This is a spiritual destination.  People want to come.  There is not a Sunday that goes by that new people don’t come in.  I’m talking up to 10 new people somehow finding their way here.  I’m on the praise team and I see them come in.  It happens every Sunday!

Business are starting to thrive.  The mayor is interested.  She saw blueprints for an expansion project on their building (all those new people are cramping the space!) and came by to take a picture because she is intrigued. The man who drew up the blueprints is a church member and the mayor now wants him to draw up blueprints for a new park for the town!”

David has also noticed a subtle shift in the racial tensions that can run so high in a rural South Georgia town.

“We have 8-10 people of color in our church, which doesn’t sound like much, but that is amazing for this town. Recently we had a prayer walk around our little city and over 80 people turned out.  White people, black people, Filipino people, old people, young people, men, women, all holding hands and praying together for their city.  That probably has never happened before here.  Some of the people in that circle just one year ago wouldn’t have been caught dead in that situation.”

Even the local bonds salesman has commented,

“I see what you’re doing for my people here in this city.  I have everything to gain by these young kids ending up in jail, and you are one of the few people trying to keep them out, and I appreciate that.”

As these scenarios played out and his pastor continued to encourage him, David acknowledged it was time to get off the back row and get involved in ministry again. It was then that David began to see things come full circle in his own life. Starting with his job.

“My job is very unique – the company I work for does military contracts and I operate heavy equipment.  It pays well.  I go out of town 2-3 months of the year and the rest of the time I hardly have to go to work. Which means I can almost be in ministry full-time without being a financial burden to the church.”

The Foundation church is highly community focused.  Apart from a part-time salary for the pastor, the church directs all funds toward ministering to those in need, pouring back into the community, and building upkeep.

All other aspects of the ministry are completely volunteer run.  David sees his ability to volunteer so much time as a gift.

The church community that once breathed hope into his life has become a refuge for him and the place where he gives back in every way he can.  More than just serving on Sundays, David spends most of his weekdays doing some kind of work for the church.  He says it’s kind of the best of both worlds.

“I have this great job, but it takes minimal amount of time out of the year, which lets me devote a lot of time to the church.  That means anything from remodeling the sanctuary because we were out of room, construction projects, ministry in general, teaching, preaching…”

As he becomes more involved in ministry, David is amazed at the number of unchurched people he encounters despite being in the Bible Belt.

His perspective of ministry is constantly challenged. He often says that community saved his life.  Now he wants to offer the gift of community, grounded in the gospel, to others.

“I didn’t have to go back to Mexico to do missions.  That’s what it has shown me.  There is a desperate need for the gospel here.  Not a new program – just love God with all your heart, soul, mind… and your neighbor as yourself.”

Before, I was so caught up with perfecting my theology and my arguments… but you come to a town like this and you have to throw that playbook out the window.   They need to know how to get through Monday morning. God called us to love them and He will change them; I wish I had grasped that concept sooner.  Until I was the broken one, I couldn’t see it. I grew up a poor missionary kid and some things were tough, but we didn’t grow up broken.  I’ve been broken since then.  Really broken.  But that’s what allowed me to be where I’m at now. It changed me.  It gave me compassion for people who are hurting.”

Other seemingly unfulfilled and abandoned dreams have come back into focus as well.

He is now only a few hours shy of earning his pilot’s license and he teaches Old Testament Survey in a Bible Institute in Colima, Mexico, via Zoom.

“I’ve always had a heart for missions and Mexico and thought I would go back. I also wanted to somehow use flying in missions.  At this point I don’t know because everything I thought would happen, hasn’t… but I do still get to have a presence there and I want to do that as much as I can.  It’s a really great opportunity to be a part of two worlds.”

Of course, the pain of the past hasn’t magically disappeared.

Trying to make sense of “why” his life took this path is always tempting.  And while he doesn’t believe he will ever know the whole answer, David says that he recently had a conversation that put a lot of things into perspective.

“I know my job is from the Lord, but I often wondered when I would ever use bulldozing skills in ministry? What was the point of that detour exactly?   Well… this man asked me what I do for a living, so I explained.  He already knew I spoke Spanish and am close to getting my pilot’s license.  Then he asked, ‘There’s this mission outpost in Belize… there’s a dirt runway full of potholes and a bulldozer sitting there with no one to run it.  If it works out, can you go down there and fix it?’”

The question floored him.  Fixing runways and roads is exactly what he does for a living. Even though this particular opportunity didn’t come to fruition it did answer his question: Sometimes, Jesus needs a bulldozer.

As if watching his life through a camera lens and suddenly zooming out, he saw pieces falling into place.

Through all the painful events of the past few years, God had been working in ways he couldn’t have imagined for himself:

Yes, there are moments when it is still tough and I want to cry, but I also see there are too many moving parts for this to be anything other than a divinely ordained path.  Through it, the Lord gave me a certain grace to face it even though I didn’t want to. This is bigger than me.”

The Foundation church is growing and making an undeniable impact in the city of Nahunta, Georgia.  On a purely humanitarian level, the church has given back over 60% of their “income” (amounting to over 40k) to help people eat, keep the lights on, and do mission work.  More importantly, they continue to see lives changed through the gospel of Jesus Christ.