Christmas is the most wonderful time of the year… except when it isn’t.

For many individuals, the loss of a loved one has made the holidays painful.  Attending a Christmas Eve service may sound joyful and encouraging, but for someone experiencing deep loss it can be too much to handle.  They will likely decline to attend in order to avoid the pain.

Pine City Evangelical Free Church in Minnesota has lived through their fair share of sorrow in the last few years.

Both within their congregation and in their community, they recognized the desperate need to host a Christmas gathering specifically for those in the community who had experienced recent loss.   So, this Christmas, individuals from all over the Pine City community trickled into church for a quiet “Blue Christmas Service”.   There was no pressure to put on a joyous and animated front, but instead it provided a comforting environment for individuals to acknowledge their grief and lament before God and with one another.

Originally from New Jersey, Joel graduated from TBC with a Pastoral Theology degree in 2002.  He served as a youth pastor at Landmark Baptist Church in Seffner, Florida, for eight years prior to accepting his current pastoral position.

Reflecting on his time under the leadership of Steve Barber at Landmark, he says,

“He was one of the most compassionate men I’ve ever met.  Sometimes he did and said things I didn’t understand, but now I do.  There is beauty in accepting and confessing hurt.  His compassion for hurting people combined with other situations in my life have led to this moment.”

He goes on to explain the intense grief their community has recently experienced.

“In the past three years I’ve buried eight parents that are younger than me. Not to mention a number of older people, plus some really tragic funerals in the church and the community.  These were people who were my friends.  There have been freak accidents, complications from surgery, you name it.  I know that especially around the holidays life is hard.  I’ve done a lot of grief counseling and walked through some really hard situations with people.”

Joel points out that the idea for a Blue Christmas Service is not original with him and was actually several years in the making.

“I listen to this podcast, Doctrine and Devotion. They talked several years ago about the fact that they do a Blue Christmas service.  I thought it was a great idea!”

The church intended to host this service in 2020 but a spike in virus cases caused them to halt their plans.

Early on in 2021, Joel attended a theology conference which focused on Psalms.

One of the sessions was on lament, and the content captivated him and impressed him anew with the need for ministering to those living through grief.

Following the conference, Joel began a season of study and teaching on lament… and continued to walk through grief with many people.  All of this culminated in the decision to host a Blue Christmas service this year.

“We really only expected eight or ten people to show up.  We figured that not only is this really hard, but it might be so hard, that they might not want to come to something like this.  But we ended up with about 45 people attending.  I’d say half were from our church and half were from the community.  We didn’t even advertise – it was mostly word-of-mouth.”

The Blue Christmas Service was subdued and focused on scripture reading and prayer; only a couple of contemplative carols were sung. 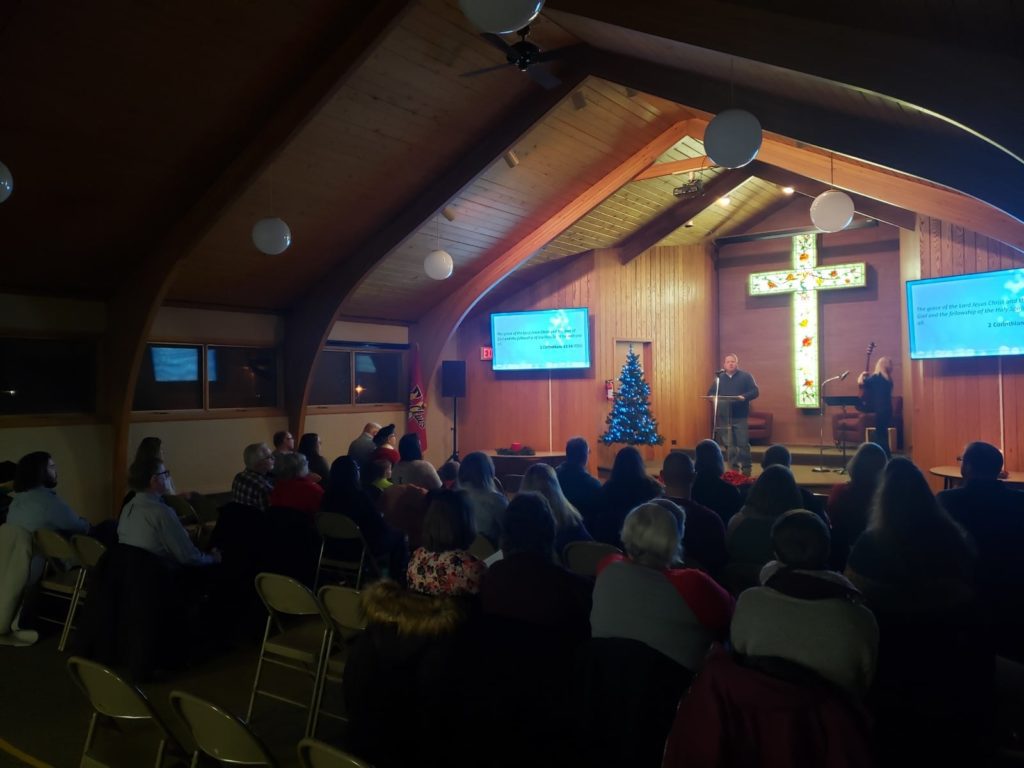 The church hosted it in their old sanctuary featuring a large stained-glass cross which gave a peaceful, reverent ambience to the gathering.  A Christmas tree with blue lights was the only visual indication of the season.   Joel shared the background for the carol “O Come, O Come, Emmanuel” before singing it together to close the service.  This carol is a song of deep longing for the Messiah and contains beautiful expression of deep emotion and longing for the hope found in Jesus Christ.

Feedback indicated the service was deeply appreciated and a healing experience for those in attendance.

One of the elders in the church is the local mortician, so he was acquainted with every individual who attended the service.  He voiced how it impacted him saying, ‘I haven’t slept much because I’ve just had call after call for days on end.  I was so exhausted.  I thought about going home, but I left church more rested in my heart and soul than I ever could have been had I gone home.’”

A pastor from a neighboring town expressed his thankfulness for the opportunity to have his grief acknowledged during the holiday season, which for various reasons had become the “worst time of the year” for him personally.

Even Joel, as the host pastor, says he was deeply invested in the service due to all the grief he has experienced.

“I have personally dealt with so many people in grief… as a pastor you take that on yourself. You feel it deeply.  I did it because I wanted to minister to these people, but in a very real way I needed it too.”

The church plans to host the service again this coming year, this time making it an intentional outreach into the community.

Joel is married to fellow alumnus Jenine (Elementary Education, ’99), and they have two sons, JJ and Jace.

For those interested in learning more about the subject of lament and the concept of a Blue Christmas Service:

Joel Preston recommends the book “Dark Clouds Deep Mercy” by Mark Vroegop for insight on lament and the importance and spiritual benefit of expressing it to God.  https://www.crossway.org/books/dark-clouds-deep-mercy-tpb/

The podcast stream from where Joel originally got the idea for a “Blue Christmas Service” can be found here:  http://www.doctrineanddevotion.com/