Last year’s graduates experienced a senior year punctuated with lockdowns and health concerns. Among them was recent graduate Joshua Jackson.

Joshua grew up in church, valued hard work, and had big dreams. In the summer of 2016, Joshua was visiting Jacksonville, Florida from his home in Marksville, Louisiana. But by summer’s end he decided to stay and attend college in Jacksonville.

His first instinct was to Google local colleges with soccer teams, which led him to discover Trinity Baptist College.

He emailed the men’s soccer coach and got a call back almost immediately. Within a few short days, Joshua was planning out his college years as a forward on the TBC men’s soccer team.

“I didn’t have much with me, you know. I had one bag with clothes; with summer vacation like stuff. But I thought, ‘OK, well, I guess we can just wing life right now!’ … and I stayed for four years!”

Fast forward to his senior year, and Joshua was trying to balance an extremely hectic schedule.

After three years playing on TBC’s soccer team, his playing eligibility was over and he threw himself into every resume-building opportunity he could find. He knew that he did not want to be a professional athlete, but he did dream of working with a professional team. His mentality as he tackled that goal was, “Whatever it takes for me to get there!”

Pretty soon, Joshua’s days were completely full, all with a focus on reaching his goal.

“I became the director of game day management for Coach Jones and I did every home game for TBC. I was the assistant coach for the men’s soccer team.  At the same time I was head coach for the academy soccer team. All of this on top of being a student….”

And then… spring of 2020 arrived, and everything shut down.

Of course, everything in life was impacted one way or another by the aftermath of 2020.  After completing his courses and earning a bachelor’s in Business Management and Ethics, Josh’s graduation ceremony was delayed.  But even more disappointing was the loss of his ideal internship opportunity.

“[After graduation] I was supposed to go to the Houston Dynamos. I was accepted to an internship over there to be their equipment manager. But the start date kept getting pushed back because no one knew what was going on with covid at that time.”

Eventually, the internship was canceled.  It was a devastating set-back but he continued to work toward his goals.

That fall he found himself on campus again, pursuing every opportunity to gain more experience while he waited.

“I came back to TBC and worked that next year. I prayed every single day, and I had some pretty rough days too. It felt like I had the opportunity of a lifetime to be on a professional team and then covid hit and it was like – gone! I thought, ‘I’ll never get this opportunity again!’”

“But then,” Josh says with a grin and a finger in the air, “in spring of ’21 the Orlando City had the exact same position open up. I emailed them and by the grace of God, here I am!” 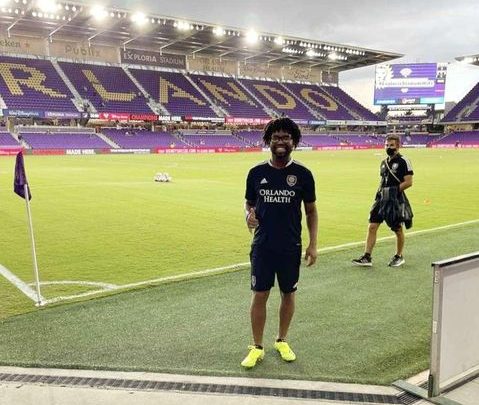 He now lives in Orlando, Florida and is the Equipment Manager for the Orlando City Soccer Club.

He handles it all: from jackets and jerseys to practices and locker room setup, and assisting with huge game-day events.

Going from small college games to nationally televised game days (some on ESPN) is a drastic change. But Joshua says that the experiences and problem-solving skills he developed under the supervision of his TBC coaches helped him manage the adjustment in stride.

“Being the director of game day operations really helped me out. At TBC you might go to a home game and think it goes smoothly, that there’s not a whole lot to it. But you have no idea the stress from figuring out that game. But that’s my job – to take on all that so you don’t see it. So you can enjoy it. So that helped me, having to fix problems quickly.”

He loves what he is doing and says that the pressure and buzz on game days is energizing.

“Going from college to professional is so different. National Games days are huge. There’s like 20,000 fans… the fact that I’m around professional athletes is cool. But after a while that dies down. Eventually you realize they’re just regular people… but being in front of huge crowds like that – wow. My mom took a screen shot of me on ESPN. That’s just crazy. Everything I do here I enjoy. It’s so interesting.”

Amid all the excitement of his position, Joshua is looking for ways to use his experience to help others.

He says that he sees some students start out at TBC and then transfer out because they imagine bigger athletic opportunities at other colleges. But he says that isn’t necessary.

Just five months in at Orlando City, it seems he is already opening doors for others.

“I’m already getting calls and emails from other people who I don’t even know. But they’ve heard of me and they want to know how to get into an internship. They’re from a small school and no one knows them so they want to know, “Hey, can you help me out?”

Joshua still visits the TBC campus often and TBC has gone to visit him.

He likes to talk strategy with the men’s soccer team and he maintains a close relationship with the coaches who have helped him achieve his goals.  Joshua hopes to use his perspective to help current TBC soccer players see the realities and possibilities of professional athletics while encouraging them to push forward without cutting corners or assuming life is better somewhere else.

“Everyone wants to be a professional athlete.  But I tell them it’s not perfect. We don’t have the best food. The showers are still cold. We have problems every day at our facility. Even through it’s a professional team — nothing is perfect. TBC isn’t a pit stop. Take advantage of all the things you can get into while you’re here. It’s not about the school. It’s about how hard you’re willing to work to get where you want to go.”

He reflects appreciatively on the influence of his college coaches.  Their leadership and trust taught him how to deal with a myriad of scenarios that have given him the confidence needed to tackle jump in to his position with at Orlando City.

“I love Coach Jones. He helped me so much. He trusted me with a lot and helped me build my resume.  Also Coach Dan, Coach Greg, taught me and Coach Byrd has been a huge inspiration for me as well. He’s helped me with most of the successes I had at TBC; him and his whole family. It all helped get me where I am now. When I visit TBC I feel like I’m at home.”