Paul has had a successful and exciting coaching career. Some of his most notable experiences include being an Assistant Coach for the Super Bowl XXXV Champion Baltimore Ravens and Jacksonville Jaguars. He is now a certified coaching specialist, philanthropist, and entrepreneur.

TBC was honored to welcome Paul McCord to campus, where he spoke to a room full of TBC coaches and student-athletes.

As a committed Christian, talented coach, and former NCAA and NFL player, McCord challenged student-athletes to deepen their relationship with God and be strong members of their team who lead with integrity, grace, and faith.

He says that sports are about more than just the years of playing in college or professional sports, but they do play a significant role in shaping you into who you will become.

“You won’t play sports your whole life, but you learn that every single thing you do matters. Years later it will be an important part of who you are.” 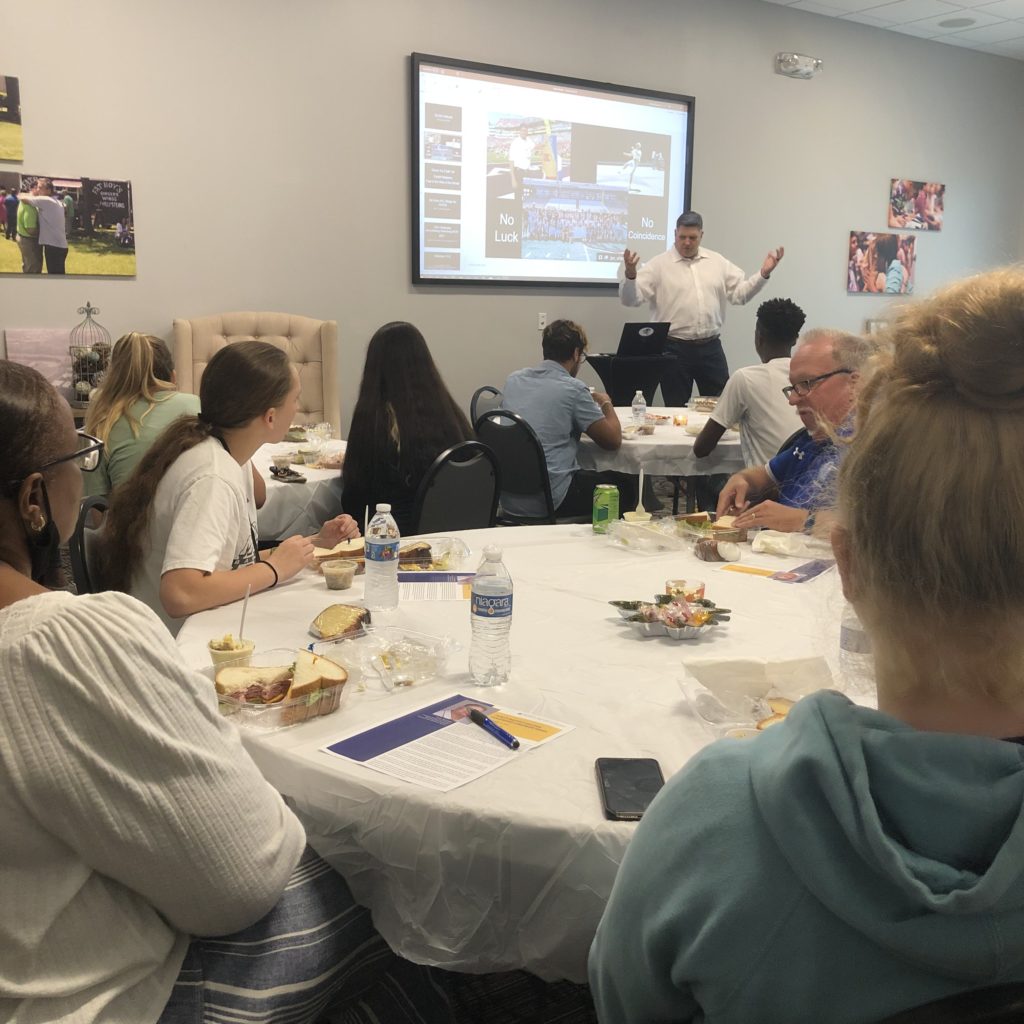 Using Jesus’ examples of leading with confidence and humility, he challenged student athletes to serve their teams and their campus.

“Serve your campus with humility. You’ll see what’s not right… but be a person of grace. Anyone can point out what’s wrong.”

He also used the disciples of Jesus as examples of people being uniquely gifted and used for God’s glory.

“Each disciple was different. Different abilities. Different faults. Each one, when they walked into the room would give you something different. That is what Jesus wanted. Each of you is uniquely created and different. As you walk around campus, let that light shine through your heart. And don’t be phony about it. Be who you are, walk into the room, command respect, respect others, study what the greatest leaders have done – Jesus washed feet!”

Paul described how he encouraged his players to live out their core values, and in that way have an impact on the world around them.

“Our core values are our culture. Our day-to-day. You have that impact in college… You never know who is watching. Maybe there’s some ‘I want to believe’ people out there. You don’t know how they’re doing. How their heart is doing.”

“It’s wasted energy if it’s just about you. If you do your best and glorify God that act becomes eternal.”

Paul also emphasized the importance of being grateful.

“There are a lot of people who can’t play or can’t coach for a variety of reasons. Think about that when you’re out there. There’s people out there who wish they could be in your shoes.”

At the end of the segment, moderator Michael Heavener opened the floor to questions from the audience.

When asked how he takes his faith with him to the field in practical ways, Paul says he doesn’t focus on the wins or losses in terms of his faith. It’s about how he and the team honor God whether they win or lose.

“…I pray before each game… I trust my athletes and that God is working in their lives. He’s not too concerned about the wins or losses.”

“I never really pray to win… I think there is strength in that prayer but for me it’s not as important as glorifying God through our effort.”

“I believe in talking to God constantly. I’m not always good at it but I believe in it. Even during competitions, I talk to God. All throughout the game. Someone gets hurt, I’m praying for them. Our team, their team, it doesn’t matter.”

His parents continue to influence his actions.

“My parents have passed away a few years back, but I often consider how I look to them when I’m coaching. I prayerfully consider my family that loves me and got me where I am.”

Speaking about what he believes is key to being successful as a coach, Paul says:

He believes that recruiting the “right fit” is essential.

Paul says that finding the right leaders is critical.

The JU lacrosse team ranks each team member according to who best represents each of their 10 core values. The team members who rate best become team captains. Occasionally that means that the captain is not a star player, but he says it has been a reliable method for selecting leaders.

This goes hand-in-hand with other changes that sparked a culture shift within their team.
Paul says there was a moment when he realized that the worst players were the ones that needed the most encouragement.

“We changed our culture about four years ago. Now we say, ‘Treat your worst players the best.’”

He went on to challenge the team captains in the room:

“As a captain, you might have someone who’s just not there yet. What you should do is say, ‘Hey, sit this one out and let me show you.’ Just give him that little bit of love and little bit of compassion. You’re following HIM. [Jesus] You don’t take the time to ask ‘what would Jesus do’… He didn’t play college sports! You follow his example. He didn’t criticize the ones who were the lowest. As much as they were messing up.”

One student athlete asked for tips on how to keep a team motivated through the off season.
Paul laughed,

“Oh, man… the off season. I don’t believe in off-season. I think it’s a life. You chose the life of the team you want to play for. A friend of mine who was in the FBI says as an agent they tell you, ‘You came to us, we didn’t come to you.’ So, remind your players: they’re choosing you. Be that lifestyle.”

“Find healthy things to do that replenish you. You gotta work on your game on the mental side. When you get to college that’s 75% of what makes you better than everyone else. It becomes a mental thing. Coaches should never have to coach effort at the college level. So, in off season, do self-improvement.”

Students and coaches had the opportunity to hang around after the event to talk. Several took photos with Paul and even tried on a few of his championship rings!

TBC is grateful for this opportunity to learn from a remarkably successful individual who is also a positive, humble example to follow, both in his own community and beyond.

Paul is a certified coach and teacher with LivingWell Therapy and Coaching.

You can read more about Paul’s career and accomplishments here.

Learn more about the TBC Eagles at www.TBC.eagles.com