complete with VR sets, 3D printers, and a skills development program that plays out like a round of Shark Tank.  He also coaches baseball (varsity, junior high, and the travel team), and is a key player in the school’s technology integration. 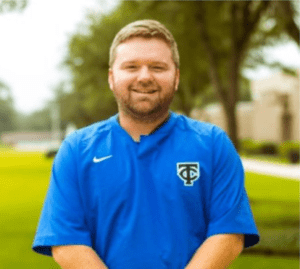 A life-long Jacksonville native, Danny attended small private schools throughout his childhood and loved baseball.  Immediately after high school, he began coaching and pursuing a career in Air Traffic Control from a local state college.  But things took a different turn his junior year when his high school coach (Gil Morales) asked him to coach at Trinity Christian Academy.  When he wasn’t in a college class himself, he was either coaching baseball or subbing in TCA high school.

Danny quickly realized his gift was building relationships.  And the environment he loved centered around the high school baseball diamond and the students that filled it.

“I like to be able to give back to the game that gave me so much… and I realized I didn’t really want to sit in a dark room all day and talk to pilots I couldn’t even see.”

He felt so strongly about this that he decided to start over with his college career.

Being on the same campus as Trinity Baptist College made the transition to an education degree convenient.  It was easy to go back and forth between responsibilities, and he was already plugged in at TCA where he would eventually do his internship.  After graduating in 2017 with a B.A in Secondary Education, Danny continued to work at TCA, coaching and teaching computer and Bible classes.  He credits the work ethic and thought patterns he learned in baseball for much of his success in the classroom.

“I’m constantly asking myself how we can get better, achieve more.  When I first started as a computer teacher I was given a book… I looked at my principal and said, ‘No. I want to do this my way – books aren’t going to cut it.’”

His experience with marketing baseball teams over the years gave him several ideas.  By his third year teaching he was able to land a grant to fund updated equipment in addition to a new classroom set-up. He transformed his class space from three rows of computers and a projector to a full-on tech lab and expansion into a

second classroom space (with plans to add another room this fall).  One classroom is mostly 3-D printers, computers, and wall-mounted screens.  The second room focuses on robotics and other hands-on technology including Chrome Books and VR sets which are available to enhance other core curriculums in the high school.

In between design classes and coaching, Danny meets with teachers to brainstorm ways to better integrate technology into the classroom.

Think using the VR sets and walking through the Roman Colosseum during history class, or exploring Jerusalem in Bible class, or running with the bulls in Spain like the Spanish class did last year.  There are so many fascinating options!

A self-described nerd, Danny was busy 3-D test printing tri-color designs to add to his classroom walls while talking about his role at Trinity Christian Academy.  As multiple printers cranked out the designs in the background, he pointed out the different “theme walls” as he calls them.  One section is dedicated to Disney rides, another to superheroes, and a separate growing collection for Star Wars.

“I don’t want my kids to dread this class.  It’s an elective, but you can still dread an elective, so I do my best to make it fun and practical at the same time.”

This coming year he is adding to the curriculum with a Design 3 class to enhance hands-on skills.

“I want them (every student who takes all three design classes) certified in Photoshop and Premier going into college.”

Throughout the three design classes students create and market a fictional company.  They learn what makes a good logo, how to effectively market a brand, and how to promote on social.  They also gain practical knowledge of how to create those logos and marketing materials using the technology available to them in class.

“The final project is where they put it all together and Shark Tank it to us.  This past year one group made their own t-shirts and wore them while presenting their company.  It was awesome!”

This summer Danny is spending a lot of his time testing out new design ideas for next year and coaching baseball.

Danny is stoked about travel baseball.  Six tournaments are on the schedule this summer so it will be exciting!  Last year’s lock down took a toll on him just like everyone else.  He is fully embracing the return to a busy life on the field and in-person teaching in the fall.