“Lord, lead us to the hungry!”

Ben and Kelsi Patton have been on the mission field of East Africa for three and a half years.  In that short time, they have witnessed God’s hand at work in unexpected ways.

Ben (’18 Worship Arts) and Kelsi (’17 Missions) Patton are both missionary kids who knew they wanted to go into missions themselves. Immediately after graduating from TBC (as in two days after Ben’s graduation) they began their missions training in Zambia, where they lived and ministered in the bush and villages. It was during this season of intense training that they both felt a desire to live and work with the people of Zanzibar.

Zanzibar is a small island chain off the east coast of Africa.

The Pattons describe life there as “…a mixture of bright, colorful African culture, slow island life, and the Muslim religion.”

Even though the government is secular, everyone in the government is Muslim.  So, while they do not live under sharia law, there is a lot of persecution at the village and family level for those who do not identify as Muslim.

Understanding that gospel work in Zanzibar would be impossible apart from God, their prayer has been, “Lord, lead us to the hungry people!”.   God has been faithful to do so!

As an up-and-coming tourist destination, Zanzibar does not welcome Christianity, but it does welcome westerners.

On their first foray into the village, a young woman walked up to them and struck up a conversation.

Kelsi says, “We were just walking through the village and this girl (who is now one of my really good friends) came up to us and invited us to her house.  We were a curiosity to her; she wanted to know why these westerners were walking the village dressed like locals!  So, we went to her house and answered her questions, were able to pray for her, and started a really neat relationship.  Every time we went to the village after that we saw her and started to make some connections.  Friends would stop by and we would get invited to another family’s home.”

Life in Zanzibar can be harsh, and most people have never experienced a relationship with a God who cares.

The Pattons explain that often, their first connection with an individual presents an opportunity to pray for them – for their business, their family, their health… any number of serious issues.  Time and again, the Pattons have watched the walls of resistance to the gospel crumble before the grace of a loving God.

“We pray for healing, and for their businesses that they will be able to provide for their families.  And we come back the next week and we are told that their business has multiplied beyond their imagination.  Or they are completely healed.  And it is so sweet to watch because God loves people so much more than we do! He proves it in such beautiful ways!”

As the weeks flew by, the Pattons were surprised to see God touching hearts and drawing people to Him in rapid succession.

In the first few months they saw dozens of people choose to walk in a relationship with Jesus.

“When we first got there [to Zanzibar], we were very much under the impression that it would be very difficult because we heard that it takes a long time to reach Muslims.  We went in with little faith honestly.  We expected it to be a year or two or three before we saw a convert and it just wasn’t that way.

We were kind of blown away. And we aren’t pushy about it.  We don’t want people to pray a prayer. We want them to have an encounter with the Lord.  We have witnessed that so many times.  We are amazed at how God has shown himself to them.  What we are finding is that discipleship is the hard part.  Helping get people from the introduction to God to walking out life in the kingdom.”

Within five months, Ben and Kelsi realized that they were capped in terms of what they could handle as a team of two with dozens of individuals who desperately needed discipleship.  It was this realization which prompted a new vision for their mission work.

Organizing and developing a training center became a priority.

With this goal in mind, God once again brought to Himself those who were hungry; those who were serious about their faith and willing to dedicate their life to the gospel.

The training center launched in a rented house in August of 2021, with a total of 9 individuals.  The second term saw 13 more who were interested in learning more about the gospel in a methodical, purposeful way.

“For three months we all lived together, worshiping, praying, and getting into the presence of the Lord together.  We had four hours of classes in the morning and afternoon, we also went into the villages to do some hands-on evangelism.  Teaching them how to live in the flow of His spirit, caring for the sick, asking Him for the words that need to be spoken.”

At this time, there are a total of 17 local missionaries as a result of the first two training seasons.

“It is amazing to see how these people who were very passionate, also became very grounded, spiritual, and have learned to listen to God.”

Learning to listen to God may sound like a given to you, but the Pattons have often heard this statement: “We didn’t know that God speaks to us!”  In the Muslim religion, Allah doesn’t have personal interactions with people.  So, Zanzibaris come to Christianity with that same perspective of God being distant.  It is revolutionary to their perspective when they realize that God speaks, leads, and gives direction for our lives!

The Pattons see themselves as the bridge between the Zanzibar believers and the resources that will enable them train to effectively share the gospel with others.

“We have no illusion that we are the saviors of this place.  They (the local Zanzibaris) are the best fit to do the work.  We have the privilege to come from a nation where we have so much access to training.  We got to go to Trinity and take all sorts of Bible classes and missions classes and these are things that these people will never get to do!”

Even if they had access to training, the logistics would be difficult to overcome.  Full-time work in Zanzibar is 12-14 days, 6 or 7 days a week.  This makes it nearly impossible for local pastors to offset the cost of ministry.

The long-term goal is to develop a sustainable local farm and build a training center on purchased land.

The farm will enable local mission work to move forward while providing for basic needs. Currently, a business-minded couple with extensive farming experience is managing the farm.  The farm itself is in its beginning stages (the first watermelon harvest was last month!) with plans to develop into 12 acres of working farmland.

Purchasing land and building their own dedicated training center facility will enable services and training to take place in a relatively safe environment.  Since all local land and buildings are Muslim-owned, any activity can be shut down at any given moment and attendees threatened.

“… we can get kicked out so easily… We want to have a place where we can safely have services, pray with people, and share with them in a private space.  It is a very communal lifestyle so if you’re sitting out in the open, people will join you.  Which is fine but if there are people who are afraid or have something personal to discuss it would be good to have a private space.

Currently, the house used as a training facility has high walls which helps keep people safe, but we do have to do things on the down low so we don’t get kicked out and we don’t want people to risk any more than they need to.”

The three-month training sessions are a combination of Bible knowledge, discipleship, and hands-on evangelism training.

During the training seasons, Ben Patton does most of the classroom teaching with some guest speakers coming in to assist when possible.  Usually these guest teachers are local pastors or individuals from the mission team, but occasionally someone from the U.S. will join them for a time.

Kelsi is typically busy in a counseling role, meeting with people one-on-one, listening to their stories, and discipling them.

“A lot of these people come from broken and traumatic backgrounds.  They need healing.  I love to sit with them and do something that is more along the lines of counseling.  Working through places in their souls where they have been wounded and rejected.  I do more of that than I do actual teaching.”

“Lead us to the hungry” is a prayer that continues to be answered.

Through mundane methods to what can only be called supernatural intervention, the Pattons and their team have watched God open doors for the gospel where there seemed to be no way.

A nearby island is a cultural reserve and completely closed to westerners.  A husband and wife team who went through the training now work on the preserve as shoemakers and also teach others how to make shoes, while teaching about Jesus when the opportunity arises.

Sex work is a big issue in Zanzibar.  From the training sessions, they have seen two local women begin working with prostitutes and several have come out of that lifestyle as a result.

Persecution is a real threat – and while it may not be to the level as some other areas, Christians in Zanzibar do get beaten, ostracized, property burned, women divorced by their husbands (and therefore unable to support themselves).  But even in these circumstances, God has been faithful.

In one instance the team witnessed the hand of God disband an angry mob which had been intent on harming a local mission team.

The Pattons recount that a recent trainee had a vision to start a church in a particular village known for training witch doctors.  He joined forces with a fellow believer and they simply walked into the village, trusting God to lead them to meet the right people.  Soon enough, they met a woman who opened her home to them, which led to a small gathering.  A few weeks in, a mob threatened to physically harm all those in attendance.

But the duo felt strongly that they should return as planned.  As expected, the mob returned too, armed with weapons and severe threats.  But, overcome with sudden boldness, the trainees began to share the gospel with the mob.  Like something out of the book of Acts, the angry crowd stood frozen, confused, and listening.  And then they walked away without ever actually touching the men!

Due to the threats, the husband of the woman who opened her home decided to put an end to the gatherings.  How could this possibly be a good ending?   There are now 5 little house churches scattered throughout the village instead of one!

These little house churches are by no means free from worries – any day they could be shut down or threatened.  But instead of being discouraged they see this as a means of furthering the gospel.

“We think it is actually part of the plan of God – it combats complacency!”

As they plan for the future of the ministry in Zanzibar, the Pattons are currently in the U.S. raising funds for the mission team back home.

Believing that God will continue answer their prayer to lead them to the hungry, the Pattons are planning for their third season of training.  The three-month session will begin in June 2023!  Please pray for the safety of all involved as well as for the plans for purchasing land and developing the farm.

Kelsi is a second-generation TBC grad, daughter of Keith (’95) and Anita (’95) Brock 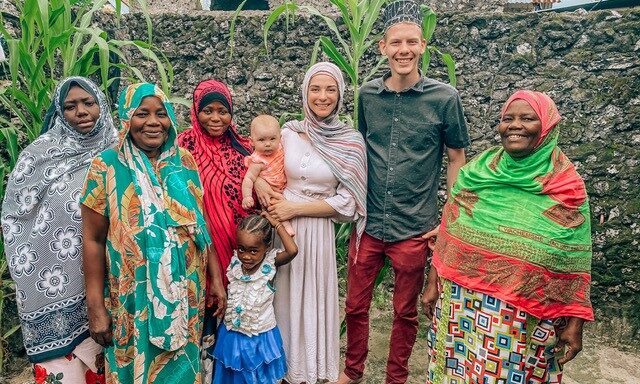