“Looking back, it was obvious.”

After all, hindsight can be relentlessly clear.  But we still have to live life in real-time, regardless of our limited perspective.

For Charity Cordell, 2020 was a season during which she couldn’t see clearly what was happening in her own life.

Depression (especially post-partum depression) can be hard to identify and even harder to accept.  Often, it takes an objective third party to see circumstances for what they really are and compassionately communicate truth to the sufferer.

Charity was pregnant with their daughter when she and her husband, Jonathan, and 1.5-year-old son relocated from a 3-story walkup apartment in Queens, NYC, to suburban life in New Jersey.   Of course, this entailed finding a new church, learning a new commute (Jonathan continued to commute for his job at ABC/NBC) and settling into new routines, all of which can be overwhelming even in normal circumstances. Then, along came chaos in early 2020 that forced everyone into seclusion.  Especially so in NYC and surrounding areas.

Even though Charity had experienced post-partum “blues” with her son, her experience after the birth of her daughter was much more intense.

Eventually, she came to realize she was dealing with severe post-partum depression.  However, as is common, Charity says that for the first 10 months or so she was able to mask her symptoms enough to convince herself she could handle it.

“A lot of it was a mentality so I could sluff it off for periods of time and pretend I was fine.  But at the peak of it there was no hiding it.  I lost 25lbs in a month; I had insomnia — sleeping about 3 hours a night; I had misperceptions in every relationship; I cried every single day… big, ugly, crying. I was sending emails to church leadership that were unhinged and going overboard staying up late writing blog entries…”

Looking back, post-partum depression may seem obvious, but all of this was happening in tandem with the peak of COVID-19 precautions so it was relatively easy to hide the worst of it from anyone outside the home.  Those who did see red flags didn’t seem to connect it with a physical imbalance or problem.

Charity says that in her experience, Christian circles tend to overlook the physical components that could be feeding depression symptoms.

Charity says that in her case, her depression was mostly attributed to spiritual warfare and she was referred to a biblical counselor.  Though she believes that her mental health struggles had a spiritual component, it was primarily hormonal issues and the related mental struggles that come along with those imbalances that triggered her depression.

Additionally, she cautions that many people (in Christian circles or otherwise) simply don’t know what the red flags are, or how to deal with them if they do.

“If you’ve never known someone who has gone through it you don’t know what you’re seeing and witnessing until it’s over.  But sometimes we are dismissing the issue or being impatient. Sometimes we don’t have the patience to walk alongside someone who is struggling.  Or, we feel ill-equipped to deal with the magnitude of what someone is presenting to us.” 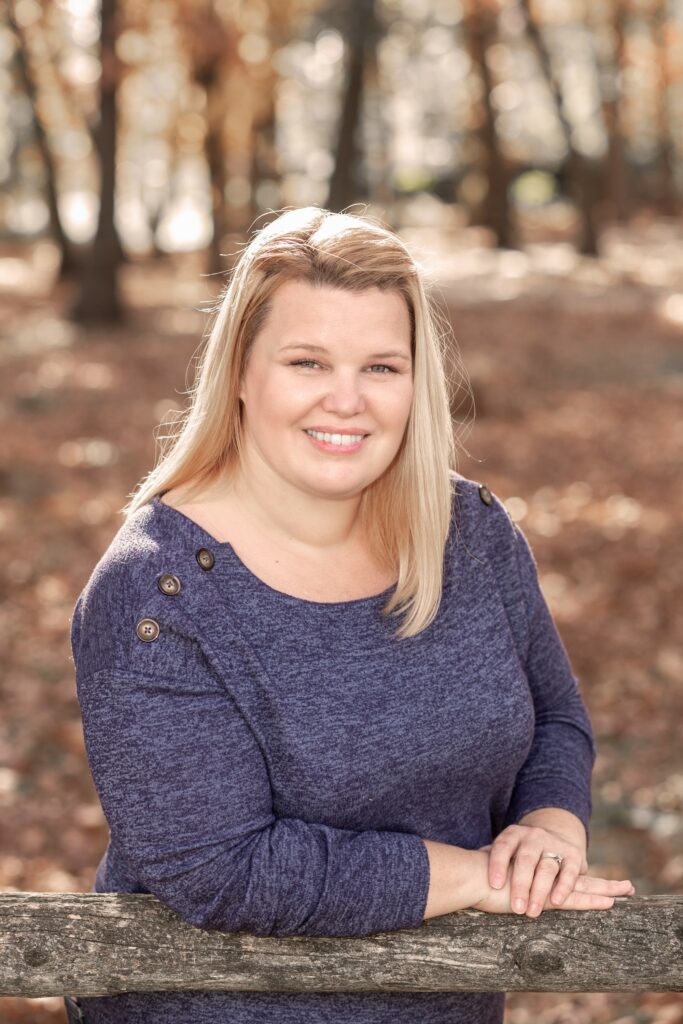 Thankfully, Charity was working with a biblical counselor who was also a counselor in the medical field.

He had experience in brain health and had dealt with post-partum depression before.  With his help, Charity was able to address the physical side of her complications with appropriate measures while simultaneously having spiritual conversations that help her navigate the spiritual battles she was facing.

Even though her physical health was the catalyst for her depression, Charity says that the most important result of her whole experience was her spiritual transformation.

Growing up in a pastor’s home, being a natural rule-follower, and always striving to serve others, she saw herself (and everyone saw her) as a good girl.

“I still don’t know how I came to a works-based salvation, but I did. So, I think the most merciful thing that God did for me was create that earthquake that caused all of that to crack wide open.  I had said with my mouth that I was a sinner, but I still thought that I was really good… But when people perceive you have mental health issues, your spiritual testimony can do down quickly in other people’s eyes and in your own eyes.  The idea of myself as a good girl was torn away from me in a short period of time.”

“…I could tell I was really vulnerable, and I knew if I didn’t deal with it my life would fall to pieces. And that is exactly what happened. Now, no one knew that was happening because it was during COVID-19 and it was just me and my family in the house. But it was devastating.  It deconstructed my faith.  I had to start with a baseline of absolutely nothing.  For the first time I saw myself as a sinner and not as a good person.  It was incredibly painful.”

Charity says that her depression just created a channel for the issues in her life to come to light.  Using the example of alcoholism, she explained that if a person has a weakness for alcohol, their PPD will most likely seek out the alcohol avenue whether or not it is a spiritual warfare issue, because the enemy will use anything that is available to him.

“For me it ended up being hurtful in the already weakened areas of my life that I had not dealt with.  This included the weaknesses in my marriage and in my testimony…”

Charity says that her turning point took place on her kitchen floor, where she angrily demanded answers from God:

“How could you do this to me? I’ve worked so hard and been such a good servant and waited for your reward.”  She says it was the first time she really had a conversation with God than expected an answer.”

“Until I understood what He would potentially allow in my life, I didn’t know Him. Until I accepted my filthy rags, I didn’t know Him. And I think that was the beginning of understanding what true grace is.  Until you admit to yourself that you’re a sinner, you don’t understand what grace is.  I might not like how He works sometimes, it might bring pain into my life, but until I see how big He is I don’t know Him.”

Of course, coming to this realization of her sinful condition was a long, slow process.

At the beginning of her breakdown, Charity says that she was very angry with God.  But, instinctively, she knew that if she was going to make it through that season, she wanted it to be for a greater purpose. She wanted nothing to be wasted.

“In spite of my anger I asked that none of it would be wasted.  That I would really understand what I was going through… and now that I’m on the other side of it, I realize that He allowed exactly that for the purpose of counseling.”

“Externally, I probably look like the same Charity that I have always looked like all my life.  I have the same capabilities; I tend to have a word of wisdom for a lot of people.  But God knew I didn’t have the compassion, empathy, or understanding; I lacked the depth of knowledge about application of the Lord’s Word.”

Two years later, Charity is now focused on allowing her past to positively impact others who are dealing with similar circumstances.

One of the ways she is doing this is by furthering her education.

She started by getting certified in Temperament Therapy through the National Christian Counselors Association (NCCA) Part of the requirements for this certification include clergy training, which she completed through Experience Ministries.

“Learning about the Holy spirit and being qualified in Temperament Therapy has been massively helpful to me in understanding myself and my experiences.  It gave me a plan to follow – a laid out expectation for when I am processing.  It made me more mindful of how I interact with my world.”

Additionally, Charity is currently earning her Master’s in Clinical Counseling through the NCCA.

When asked if she had any advice on how to approach and help people who are hurting, she says it is important to keep a few things in mind.

People often feel unsafe talking about their struggles because they are afraid of judgment.  Often, they feel this way because they have received so much condemnation already; this is common even among Christians, and it can color how people perceive even the Lord’s response to their troubles.  Unfortunately, this has created a stigma around counseling.

She suggests that people who are in the position to help due to proximity (vs. training) should guard against impatience.

“We may be tempted to wash our hands out of impatience or out of our own perceived lack of capability.”

This is when we must rely on the work of the Holy Spirit to guide us in a balanced approach to the issues at hand.  However, the opposite is also true.

“We must rely on Him for discernment when it is time to send them to someone who is more qualified; when they need more help than we are qualified to give.

Charity Graduated from TBC in 2007 with a Bachelor’s in Elementary Education.  She is a clinical member of the National Christian Counselors Association (NCCA), a Commissioned Minister of Pastoral Care under the oversight of Experience Ministries, and the newest Counselor and team member of Life Focus Center in Hawthorne, New Jersey.  Charity specializes in Grief Counseling and Women’s Issues.  She has also been a guest speaker on the subject of PPD and will lead a church-hosted workshop this fall which will address women’s issues.