Rachael Crawford’s passion for missions sparked when she was a young child.

Rachael has done a little bit of everything in her missions travels. From teaching English to refugees in Greece to joining a construction team in Mexico and, most recently, supporting a ministry through Bible clubs and food distribution in South Africa. You could say her life has been anything but mundane.

Growing up in a Christian home, she was exposed to missionary stories and the gospel as early as she can remember.   At 18 years of age she joined Youth With A Mission (YWAM) and worked with them for several years prior to earning her Interdisciplinary Studies degree at TBC.  She has been to over 15 countries in addition to traveling extensively within the continental US.

No one has ever questioned Rachael’s passion to share the gospel with the nations. But in 2019 God was preparing her heart for a different kind of mission work.

In the past three years God has opened her eyes to see the opportunities for missions in the routine of her life – not just in the exciting and focused trips to serve other people groups.

After graduating from TBC, Rachael had a solid nine months worth of mission work in three different countries planned out.

On the one hand, things seemed to be going great, her tickets were booked, and she was excited.  On the other hand, she couldn’t shake the feeling that this wasn’t right.  But how could missions be a wrong decision?

“It was two days before my trip and I was praying about it all and it was like God said ‘Rachael, I love your heart for the nations, but you never asked me if you were supposed to go.’”

There were a couple of things that led up to that realization, but it was in that moment that she realized her plans were just that: her plans, not God’s.  Unsure about her next step but convinced that her immediate plans needed to be reevaluated, Rachael moved in with family in Grand Junction, Colorado, until she found her own place.  The abrupt change in plans was a shock but she quickly got plugged in to a local church community. 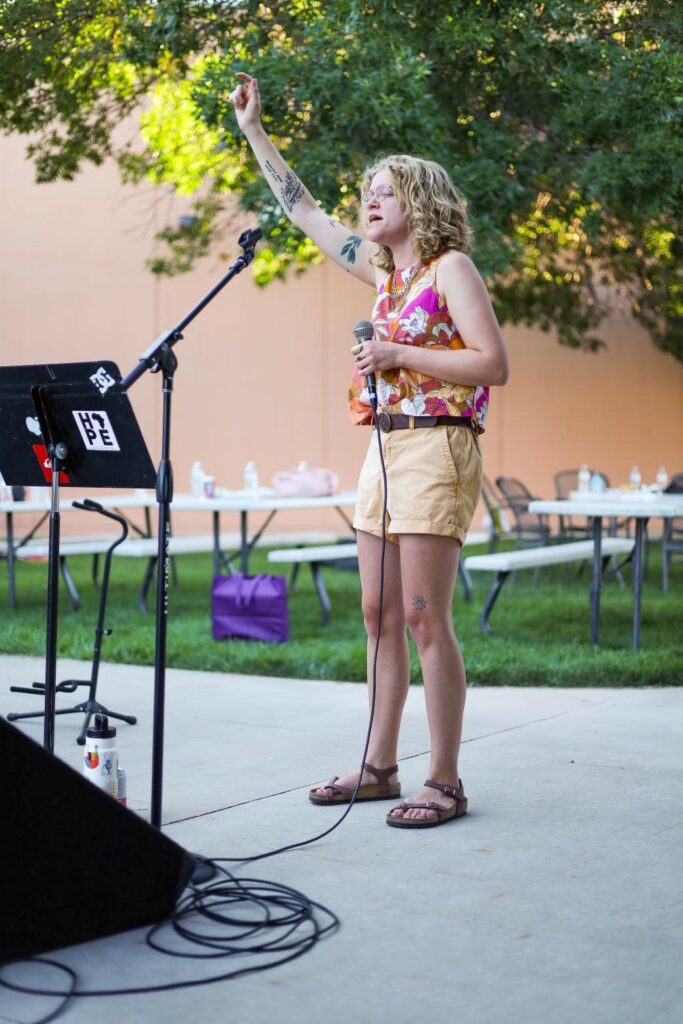 She started a job as a barista at Starbucks, where she still works now.  On the weekends she was heavily involved at her church, and in her free time she volunteered in various local ministries.  Any given day you could find her volunteering at the local homeless shelter, filling in as a worship leader at a small church in the valley, or helping organize and lead a worship night on the Colorado Mesa University campus.

But this was not the life Rachael had envisioned for herself.

She wrestled with internal questions regarding her purpose during this season of life which she laughingly describes as “just serving coffee”.

In a moment of discouragement, Rachael had a heart-to-heart with God about her life: “In what I am doing every day, is it making an impact in other people’s lives?  I just serve coffee!”

Shortly after that, Rachael had a conversation with a co-worker that gave her a glimpse into what God was doing behind the scenes.

The coworker had grown up in the Mormon faith, sold-out and committed to the church in every way.  When she came out to her family, she was kicked out of the church.  Angry, hurt and with seemingly no place to belong, she eventually abandoned all faith and belief in God.  That is, until Rachael’s constant presence in her life caused her to reconsider.

“She told me that seeing me faithful in church, following the Lord, being kind, passionate about missions…  that it had put a spark in her heart and the question that maybe there is a God after all and maybe He does still love me…?’”

“I was trying not to cry into the Frappuccino I was making, because I got my answer!  I was like, ‘OK, Lord, obviously you are doing something in my every day, in what feels mundane.  I don’t have to go to Africa — even though I want to.  This kind of thing can happen in my everyday life too!’”

Rachael says that many of her co-workers identify as LGBTQ+ . For the past three years she has realized the unique opportunity she has to be light in their lives; the opportunity to present the hope of the gospel to a demographic which often feels outcast.

“In the past few years the Lord has grown my heart for all people.”

“Before coming to Colorado I had a huge burden for refugees and misplaced people groups.  But moving here and working at Starbucks has grown my heart for all people… I never thought I would be here, and I never thought my primary ministry could be at Starbucks!  But you pray for God to take you to the hard, dark places, and sometimes that means your job — corporate America if you will.  I work with a lot of young adults who are broken and searching for something.”

The realization that God is often at work right in front of us renewed Rachael’s drive to live the “mundane” parts of her life with purpose.

Yes, even the slow Wednesday afternoons as a barista.

With time, overseas missions once again became a very big part of her life.  Sometimes God’s “no” is for a reason, for a season.  Through this season, Rachel’s local church got to know her heart for the gospel and missions as she dedicated her time and gifts to make God’s name known in her own circle.  God has once again opened doors for her to join teams in other countries, but now with a fresh perspective.

Just a few months ago Rachael returned from three weeks in South Africa where she was once again reminded how the mundane of life can be used by God.

“Our team of 16 partnered with a ministry called Experience Mission Africa, and one week we worked with 4 women who provide about 1000 meals a month to other ministries in Cape Town.  That is so much food for just 4 people to make!  I sat for an entire day and helped peel and chop 80lbs of carrots!”

Her team also supported a local ministry to provide Bible clubs for children and teens.  In addition to teaching scripture, singing, and playing games, they provided meals.  (For many of the children, the only meal they get on a regular basis is through school.)

In the afternoons they hosted a similar club for high school age students where they spent a lot of time discussing difficult teen topics. Teen pregnancy, violence, and other challenges that are prevalent in their culture. They also spent time supporting and ministering to the workers who have been there for years. 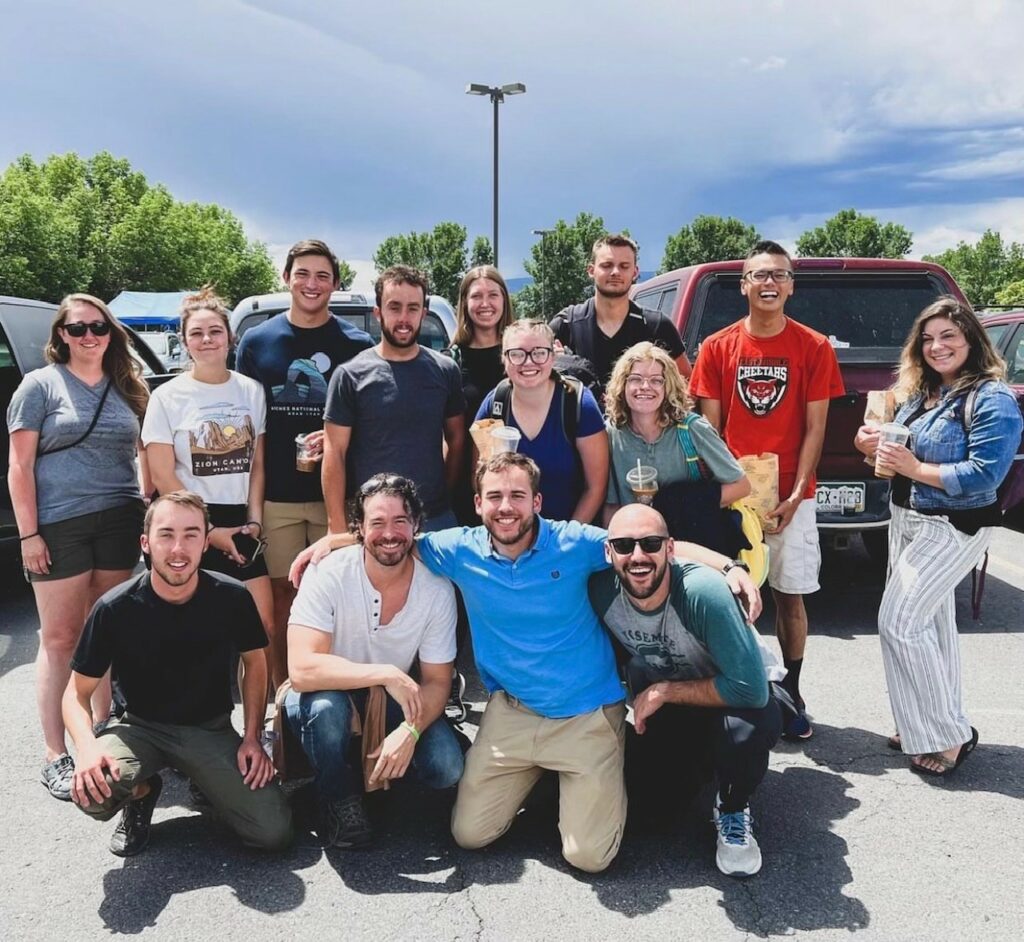 While there, Rachael heard a phrase that stuck with her: You can count the seeds in a mango, but you cannot count the mangos in a seed.

“It’s easy to count the one, single seed in a mango.  But when you plant that seed in the ground, you have no way of knowing how far it will go.  It was such a good reminder to me that whether we are overseas or taking care of our kids or working at Starbucks, planting the seed can have more impact that we can ever know!  There are a lot of planting and gardening analogies in the New Testament – the idea of multiplication, watering and not always knowing fruit that will come of it… I’ve been chewing on that concept a lot recently.”

For now, Rachael is back in Grand Junction, Colorado.  Working at Starbucks, having conversations with co-workers, and leading worship whenever the opportunity presents itself.  But ask anyone who knows her and they’ll tell you: keep an eye on her because she’s likely to pop up on the other side of the world any day, eager to reach anyone and everyone with the Love of Christ.